SBGT vs Palmdale CIF Rd 3 2019
Oct 04, 2020
0 Likes   4 Views
Training (0)
View All
Articles (4)
View All
Recap
Dec 01, 2019
Sunny Hills 24, Santa Barbara 21
Varsity Football
Dons fight hard but come up short in Championship game against Sunny Hills.
Santa Barbara, CA — With under 30 seconds remaining, Deacon Hill dropped back and unleashed a fast ball into the end zone that cut through the driving rain in the direction of Jake Knecht, but Sunny Hills defensive back Wilson Cal jumped the post route and hauled in a game-clinching interception that lifted the Lancers to a 24-21 victory.
JB Beautrow
Recap
Oct 28, 2019
Cabrillo 0, Santa Barbara 36
Jr. Varsity Football
SBHS Dons stomp on Cabrillo High
Goleta, CA — In a game that had fewer players due to the Varsity team taking a few away, the JV team still hadn’t lost their touch. The offense still had a great ground game and it didn’t lack in a receiver core and they still had the QB that could deliver a great ball and could scramble for some yardage if needed. The offense did a very good job with putting up the points. Special teams was a force to be reckoned with, being able to make sure that Cabrillo didn’t claim a lot of yards in the returns. The JV defense is definitely a force, as once again they proved to be one of the stingiest defensive teams in the game, not allowing Cabrillo a chance at seeing the end zone other than when they were trying to defend it. This year’s team has the chance for a perfect season with only DP Chargers left to play. So another wonderful game by our boys and girls and now to get ready for the last game and a chance to wipe out all of our divisional teams. Great job Dons and coaching staff, I tip my hat to you all.
Jackson Sierra
Recap
Oct 14, 2019
Santa Ynez 6, Santa Barbara 50
Jr. Varsity Football
Dons sink Pirates in 50- 6 rout
Goleta, CA — In what seemed to look like a game where the Santa Barbara Dons would possibly be challenged by the Santa Ynez Pirates in their first ever match up. Unfortunately they were not up to PAR for the JV Dons. During warm-ups the Pirates looked like they were ready to bring it to the Dons, but all they could squeeze from the stingy Dons was 6 points. The Dons have proved to be unstoppable with all their offensive weapons and the very tough & stingy defense, who has been very reluctant to give away points. Now 7-0 the Dons will be getting ready for the Lompoc Braves.
Jackson Sierra
Recap
Oct 04, 2019
Santa Barbara 57, San Marcos 6
Jr. Varsity Football
SBHS Dons take it SMHS Royals
Goleta, CA — In the Big Rivalry game Santa Barbara Dons offense fired off on all cylinders out scoring San Marcos. Santa Barbara Dons defense was also on point only giving San Marcos 6 points. This was a very great game for our JV team who is now 6-0 and now to get ready for Santa Ynez Next for Homecoming game. Great job guys and gals, you guys rock!!!!
Jackson Sierra
Photos (6)
View All 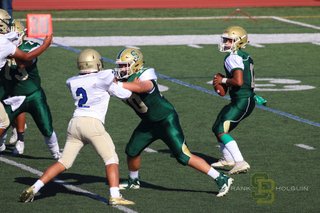 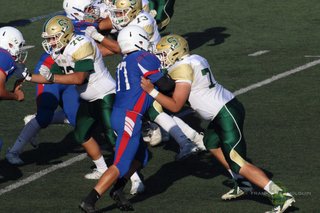 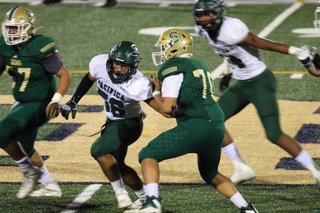