Xavier Harris’ kickoff return may have been the big blow in Pacifica High football’s lone loss this season.
But the Gonzales Road rivalry took a back seat last Saturday as the Tritons, the final postseason representative for both Oxnard and Ventura County, as a whole, prepared for the CIF-Southern Section Division 6 title game.

The Oxnard High senior tweeted at three of Pacifica’s top seniors to offer his support, saying “Whole county behind (you)... Get the dub and put the city on the map!!”Camarillo High star Grady Liddell and Channel Islands High star Cody Hoffman offered the Tritons similar pregame messages of support.

Cody Hoffman
@codyhoffmanIV
if you’re not going for pacifica, you’re wrong. they’re putting on for our city tonight!

As their buses made their way east to Whittier, the Tritons felt the whole of Oxnard behind them. And it made a difference.

“We appreciated that greatly,” Pacifica senior Malik Sherrod said. “We saw the whole city was behind us. And we had so many people in the stands for a game that was that far away. As the game grew on, we felt the crowd.”
Despite the holiday break, the school filled two rooter buses for the trip to Whittier. William Dabbs, Pacifica’s founding principal, was on the sidelines.

“We did get a lot of attention,” head coach Mike Moon said. “I was surprised how many teachers went to the game. It was pretty awesome.”

After Pacifica beat La Serna 42-41 to become first Oxnard public school to win a section football championship since 1971, the Tritons were offered congratulations by Pacific View League foes from Buena and Rio Mesa and others.

Ryan Bolland
@CoachBolland
HUGE congratulations to @mikemoon42 and his @TritonsFootball team on winning the @CIFSS Div6 championship! Mike is a good man, friend, and coach. CONGRATULATIONS! 💍🏆

RioMesa Football
@RioMesaFootball
Congrats to @mikemoon42 and to the @TritonsFootball . Great win, way to represent the Pacific View League and the 805.

“A coach’s job is to teach, motivate and inspire,” Fujita wrote. “No one does it better than Mike.”

Scott Fujita
✔
@sfujita55
Big-time congrats to @mikemoon42 and his team! A coach’s job is to teach, motivate, and inspire. No one does it better than Mike. He earns the trust and respect of his players because he expects a lot from them, and because they all know he CARES about them. Proud of you brother! https://twitter.com/vcspreps/status/1201016268523835392 …

To see our city come together like that was great,” quarterback R.J. Maria said. “We’re all friends. We’re all from the same community. Last year we were rooting for Oxnard to win the championship. We had their backs and they’re going to do the same for us.”

The support wasn’t just on social media. Just as Pacifica High players attended Oxnard’s Division 6 final last year in Covina, Oxnard players were in the stands to support the Tritons in Whittier, according to Moon.

“The truth is, when Oxnard played South Hills last year, half our football team was at that game supporting them,” Moon said. “At the end of the day, we are one community. The more we stick together, the stronger we are.”
This has not been a typical week of school for Pacifica players. Moon and several players joined Principal Ted Lawrence on “Triton Talk,” the school’s daily streamed newscast, on Monday and Tuesday.

“There was a lot of teachers and staff coming up to the players telling us the whole city is proud of us,” senior Kyrie Wilson said.

The Tritons were a subject of pride at Tuesday night’s Oxnard City Council meeting.

Penelope DeLeon, the superintendent of the Oxnard United High School District, visited practice on Wednesday and brought a taco truck with her to feed the team.

Ted Lawrence
@TritonPrincipal
Supt. DeLeon stopped by this afternoon to buy her CIF Champs dinner! Also, she was presented with a ball autographed by every member of the Championship Squad. @proudouhsdsupt @pacificatritons @OxnardUnion
Despite achieving its biggest goal, Pacifica’s season is not complete.

“We’ve been riding on a high,” Sherrod said. “We’ve learned to channel it and suppress it because we’re not finished yet, we still have a bigger goal left.”

Pacifica (13-1) will visit City Section champion Lake Balboa-Birmingham (8-4) on Saturday at 6 p.m. in the CIF State Division 2A state regional bowl. The winner will play either Manteca (11-2) or Oakland-McClymonds (10-0) for a state championship on Dec. 14 at Cerritos College.

They’re a great opponent,” Sherrod said of Birmingham. “They have some key guys that we need to stop.”

Birmingham has won seven straight since a rough start to the season, which included an early 55-14 loss to Crespi Carmelite, who the Tritons routed 37-10 in their sectional semifinal.
Moon warned against making assumptions based on results from August.

“This is not going to be a walk in the park,” Moon said. “I flip on the film and see a 6-foot-4 wideout, a 6-1 wideout on other side and two slots every bit as fast as ours… They look good.”

The game features an interesting special teams matchup. Birmingham's Mason White has 16 blocked kicks in his career, including five this season. Pacifica kicker Scooter Carranza has converted 152 straight PATs and is on the cusp of setting a state record.

“They have some fast dudes,” Maria said. “It’s going to be a good game. Both teams are competing to keep going.”

Injuries are starting to take their toll on Pacifica. Star Michael Johnson III, who had 1,485 yards from scrimmage and 16 touchdowns, suffered a leg injury against Crespi and was on crutches last weekend. Receiver Savonne Perris-Farmer suffered a shoulder injury making a key third-down conversion in the fourth quarter last Saturday.

In the end everyone loves a winner. These guys are more than that. In a day of age where transfers are king in determining the makeup of your team, Coach Moon has done it with home grown guys. Great Job Tritons lets get that win Saturday 💪🏿💪🏾💪🏼💪🏾🏈🏈 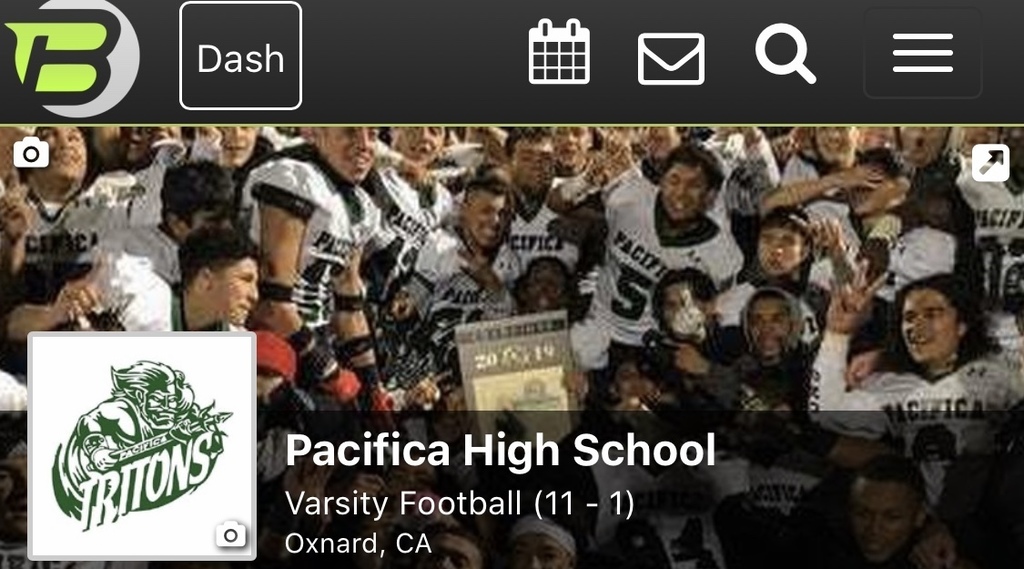 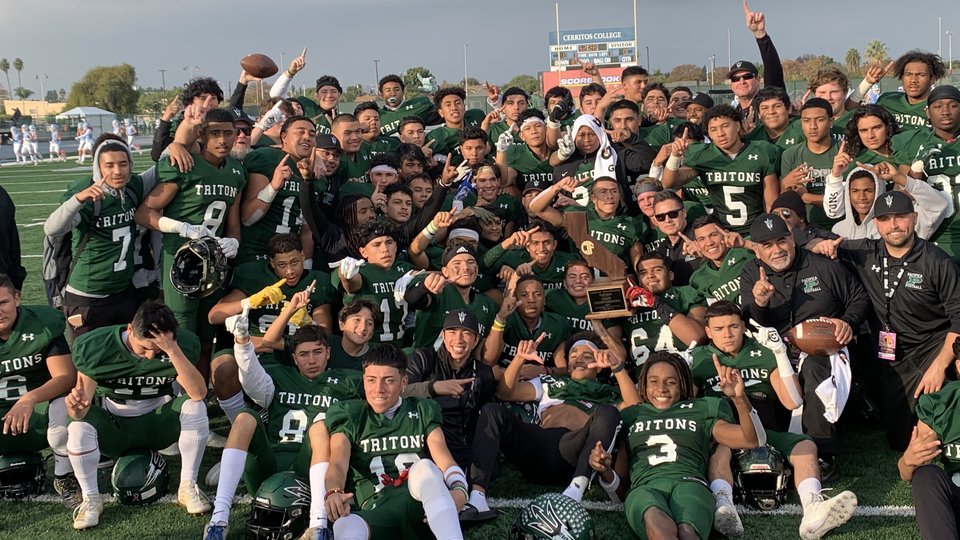 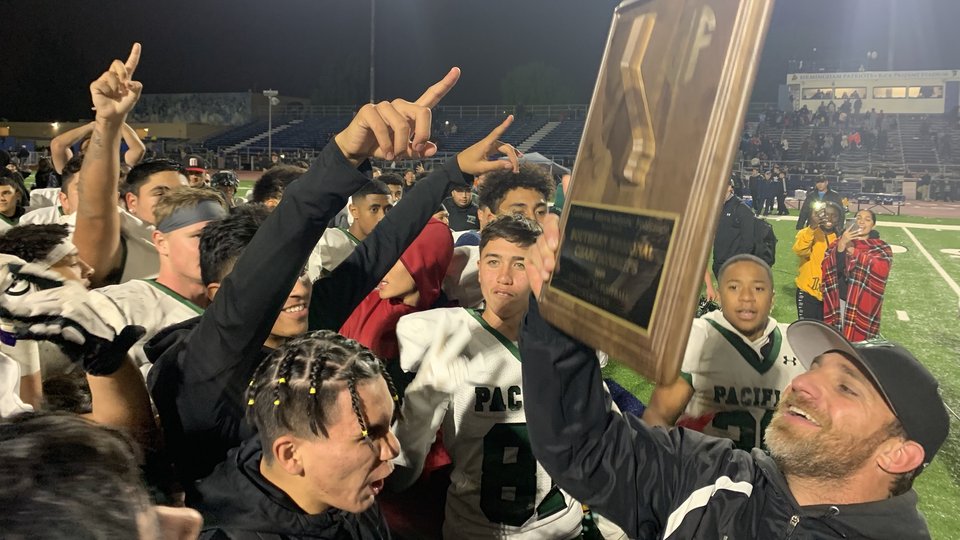 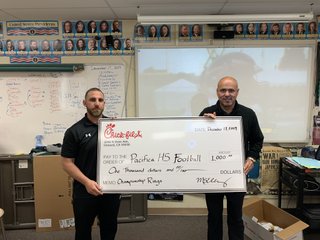 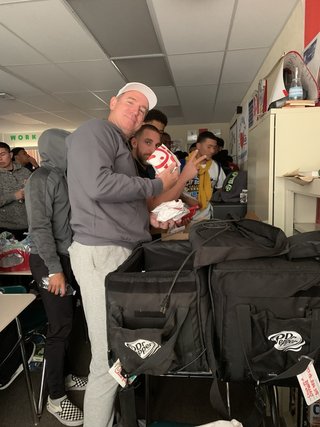 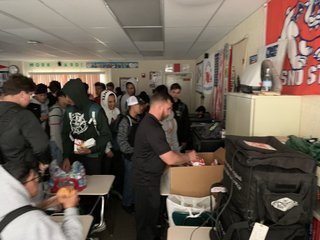 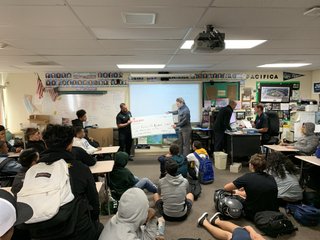 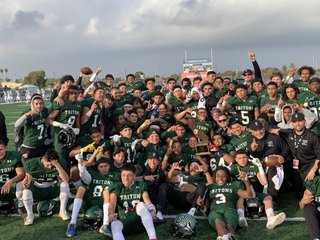 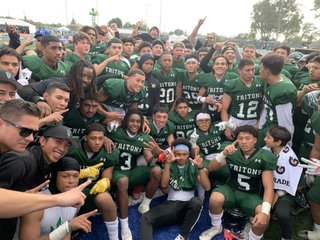