The Cocoa Beach Minutemen get their second win of the season at Taylor High School by way of a score 49-0! Cocoa Beach Football now has a season record of 2-1. It has been 3 years since Cocoa Beach Football has has 2 wins in a season or since the program gained a victory on the road. The defense had another stellar performance, pitching their second shutout of the season! Mojo Bailey rushed for 3 touchdowns to get the offense going. As the game progressed, the Minutemen offense began attacking through the air and Logan Silvea threw 3 touchdown passes. Brennan Berk was on the receiving end of 2 touchdown passes and Aaron Garber caught one. Tommy Demeter capped the offensive scorefest, rushing for the final touchdown of the night. Of course, the offensive line has continued to progress as a group and dominated the line of scrimmage, all night. Congratulations to everyone in the Beach program for such a tremendous victory! It has been 4 years since Cocoa Beach Football has had a winning record in any part of the season and the team looks to build on that momentum going into a bye week. Go Beach! 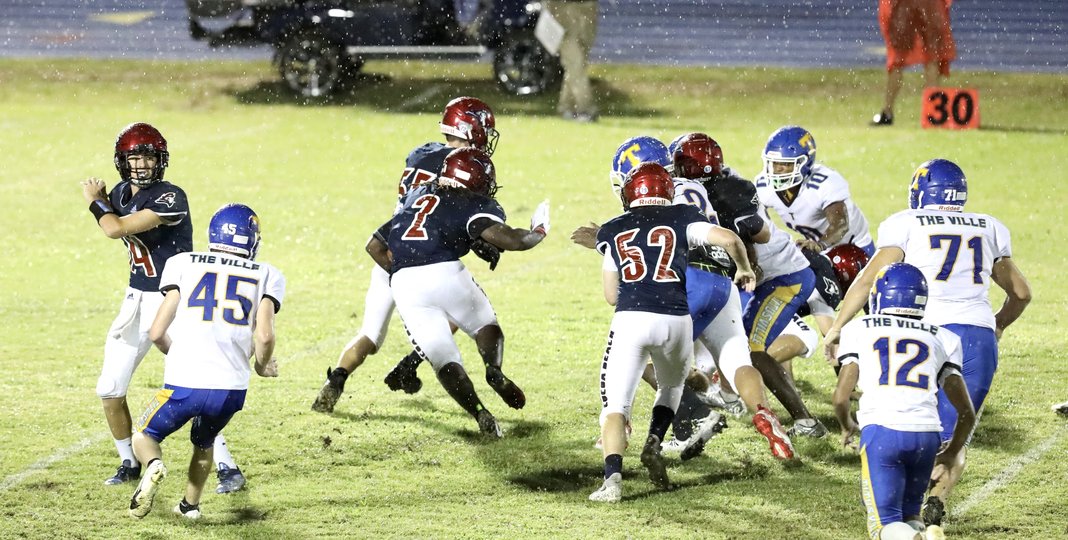 The weather did not want to cooperate on Friday night. The game was played in a monsoon. The Titusville Terriers proved to be a worthy opponent, much improved from a year ago. The Minutemen hung tough for about a quarter and and half, and then the flood gates opened up. Cocoa Beach never gave up and played with heart until the end, but suffered a crushing defeat with a final score of 48-0. The Minutemen look to re-group this week and answer back this coming Friday against Berean Christian. Some standouts on defense in the Titusville game were Mitch McNeely and Roy Miller. On offense, Brennan Berk and Payton Ellis had some nice plays on the outside and Mojo Bailey had some tough runs on the inside. Stay tuned because this season is far from over and the Beach is determined to prove themselves this year!

Mulberry was a formidable foe to start the season with. They are loaded with talent. Despite facing such a challenge, the Minutemen stood toe to toe with them for 4 full quarters! Our players demonstrated a lot of heart and courage! Ultimately, we lost 32-6, but the score doesn’t show how close the game was. The Beach offense moved the ball a few times and got into scoring position twice without points to show for it. The defense was stout most of the game but gave up too many big plays that turned into points. Aaron Garber returned an interception for a TD! AJ Barranco made a highlight catch on a pass from Logan Silvea for the offensive play of the night.